IH series pumps is single-stage end-suction (axial suction) cantilever type centrifugal pump, which is used to transport corrosive liquid with viscosity similar to water and without solid particles. The marked and rated performances and dimensions adopt ISO2858 international standard.
The temperature of transported media of IH model chemical pump is -20105. Through adopting cooling method, it can transport media with higher temperature if necessary, and is applied to transport various corrosive media or media in which pollution is forbidden similar to water in such industries as chemical industry, petroleum, metallurgy, electric power, papermaking, food, pharmacy and synthetic fiber etc.

IH series pumps are classified as 29 basic types, among which, 22 two-speed (2900, 1450r/min) types being transformed after cut by the impeller diameter of and Models, the total specifications can be 112.

1. IH series pumps are the series of products designed according to ISO international standards in all industries in China. It is mainly composed of pump body, impellers, seal rings, impeller nuts, pump cover, seal parts, intermediate support, spindle, suspended parts and so on.

2. Structural features: The pump cover is fixed on the intermediate support, and the pump cover is clamped in the middle by coupling between pump body and intermediate support. On the pump body, water is input axially and output radially. Support feet can be fixed on the base directly. The suspended parts are fixed onto the intermediate support through the rabbet, and are supported onto the base by suspended frame. To make it convenient to disassemble, the prolonged coupling is designed, so that it is unnecessary to disassemble the coupled input & output pipes during check and maintenance. To pump body and motor, only by disassembling the intermediate coupler of the prolonged coupling, users are able to screw out rotor part for check and maintenance, which is a conventional structural pattern in the world.

3. Rotation direction: The pump is driven by motor directly through a prolonged coupling, seen from the side of the motor, it rotates clockwise.

Other pic for your reference: 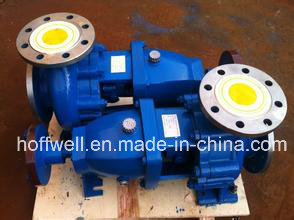